This new Chevy Trailblazer SUV has been scheduled for production in Thailand from early 2012 and we hope it will be offered in other emerging markets including India soon.

The Trail Blazer is a 7-seater SUV designed and developed with global needs in mind, this smashing looking SUV offers the flexibility and features any urban junkie desires.First the seats can be folded in a variety of ways which allows versatility. Features like Bluetooth connectivity and in-dash audio with USB connectivity will also be standard. A dual HVAC system is also on the features list. 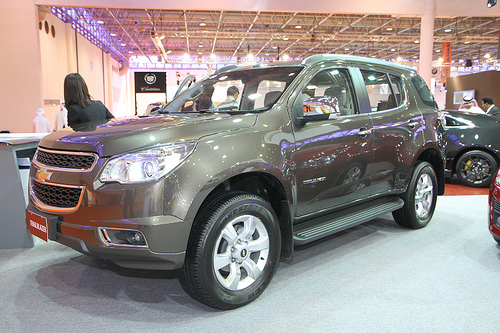 The Trail Blazer is planned with a 2.8-litre Duramax turbo-diesel engine, which features a variable geometry turbocharger promising an optimal combination of performance and fuel economy. Expect a launch but not before 2013.

Image Source: AlBargan “After spending some Quality time with the BMW X1 2013 Model, it sounds more promising Now.” The entry level model for BMW, the X1 gets a much needed facelift required for it to make it more impressive than the earlier X1 model. BMW has definitely spent some
The style inspires attention from every motorist. The engine commands the road. And the interior is the very definition of comfort and luxury. Nissan’s full-size SUV is a vehicle you have no other option but to covet: the Armada. Even the name conjures up powerful images. Of course, the
Tata Motors has been developing an all new Tata Safari Storme, codenamed Merlin undergoing tests.While earlier it was believed the Merlin would be a facelift, sources in Tata Motors have indicated that this is actually an all new vehicle that will use the Aria platform. What will not be