2015 Ford Mustang comes with a picture of ultimate muscle to show off with its muscle lines and looks. Mustang always had a special place in our hearts and Ford knows that. This classic car impresses us every time it comes up with its new variant. With fast-growing economies around the world, and with the internet, American specials like this are reaching worldwide. Now, this is not American only thing now and looking at this, Ford designed this new 2015 American muscle Mustang, also called American pony car for global customers as well.
Looking at this classy for the first time would obviously remember you of the Mustang evolutions. It comes big but though not that loud. The lines and curves are elegant even to inspire you again. Dimensions are not that much changed like wheelbase being same, width going wide by one and a half inch and height reducing by the same though the new Mustang looks bigger than the outgoing model. These proportions make it look like moving before it starts to move. 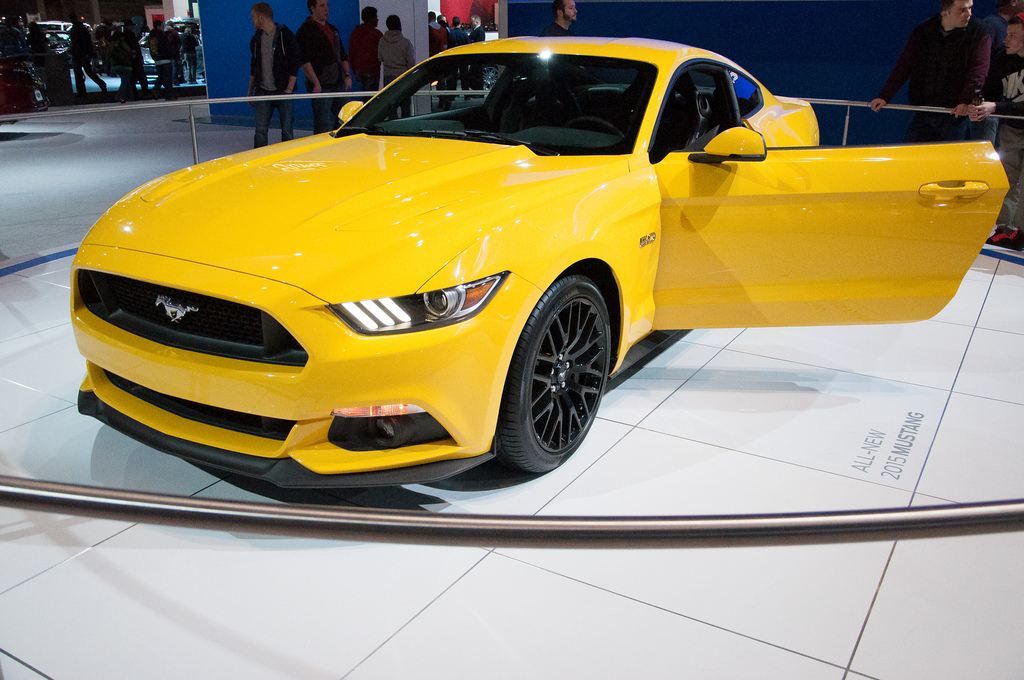 Loaded with technologies and giving world class performance has come up in six cities and four continents on revealing. In its 50 years of producing beyond 9 million+ Mustang, it is certainly more than just a car. It made many visuals in films, video games and other media, all of these making the most liked car on facebook.
There is something, the way Mustang looks makes a groar sound from the engine is key to the ultimate ride that makes the drivers go crazy about it.
A new suspension setup has been installed at the rear, the first time to improve the performance around turns. To cope up with this, the front suspension has been also improved for better grip than drift.
There are 3 engine options, an inline-four ecoboost, a V6 and a V8. Now, you can imagine how Ford is thinking about the global audience to increase Mustang reach and gain more customers. But, looking at the specs, it seems better with 2.3 litre ecoboost engine makes 300bhp and 406Nm with direct injection and turbocharging and this compared to the 3.7 litre V6, which makes 295bhp and 366Nm of torque. The V8 option is what american muscles like for themselves and to get the full pleasure of the ride, Mustang comes with top of the line Ford Mustang GT model.
With Mustang convertible, the drivers would appreciate the rooftop of multilayer insulated cloth top giving more standard and quiet cabin to the car.
There would also be a right-handed version for the 2015 Ford Mustang version.
From the front, it gets a trapezoidal grille with a three-slat LED headlamp upfront, making this a Ford family look. The power dome hood not only cools the engine but also makes it look more muscle.
The sideway figure is a more stable looking shape with the glass in the middle.
The rear is the best-looking side to look at with the traditional three-bar tail lamps and a GT badge without the ring.
The interior has been redesigned keeping in mind the quality of the cabin. It retained double-brow theme that had been with Mustang for years, so with the mustang like designing, it has changed a lot to enhancements. Fully leathered seats give you much comfort to drive this muscle.

A Look at the details through an interesting 2015 Ford Mustang INFOGRAPHIC.

This infographic was produced by cjponyparts.com with the permission to publish on Deepknowhow.com (Credit to Kayla Matthews for the graphic.)

Audi in its manufacturing has produced an elegant business car, called the Audi A8 as its flagship sedan. It can be called as the workstation. With so much technology and advancements in every field of work has made our lives better living. These inventions in technology can be seen in
Lamborgini has a new unit of machine added to its family and they are calling it the Huracan LP 610-4 Spyder. This new member LP 610-4 will replace a quite older Lamborghini Gallardo Spyder and is similar to the Huracan’s convertible version. This lambo is quite a beast. The
Start the A-Class Way The Mercedes-Benz charges up with its Sporty young Mercedes-Benz A-Class, kept in mind for the young buyers. With the German carmaker entering the hatchback segment with the super cool A-class, it embodies the design traits from its great brand of luxury. It’s a super cool